Crisis Planning: Can we see over the Hill?

Unilever recently released their annual report in which they used their new acronym ‘VUCA’ to describe how they see the international environment in which they work: Volatile, Uncertain, Complicated and Ambiguous.

One of the points we can take from this is that as human beings we are often pretty poor at predicting the future. How many of us who were watching expected Ukraine to go off as it did, and for Putin to leap into Crimea just days after the change of government? How many of us saw the Arab Spring coming?

The same can apply to the UK business environment. How many of us six years ago expected that the Scots would be voting on independence? How many of us can say we saw the 2008 Financial Crisis coming in time to be fully prepared for it? So many businesses barely have enough time to plan a few years in advance, particularly small businesses, let alone prepare a crisis management plan for when things go wrong.

Preparing for the future and identifying threats are things we all have to try to do, and one method was made famous by Donald Rumsfeld’s three categories:

We should all try to identify the ‘Knowns’. If things go wrong because we ignore those, we have only ourselves to blame.

Carrying out an exercise like this can also help to translate potential ‘Unknown Unknowns’ into ‘Known Unknowns’. Previously unconsidered threats come to mind and the business benefits.

From this, we can create a crisis plan. It may not be a plan as such, more a map of all the vulnerabilities the business could face. It may even involve a simple graph-like structure identifying the likelihood of threats against their potential seriousness: 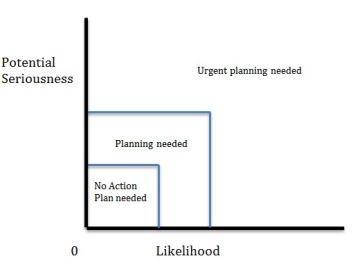 In business there’s often a direct impact on the workforce, so many reactions will involve delving into employment law and HR. Workforces may have to be re-trained or reduced, or sites shifted or even lost. Managing the workforce should be an integral part of any crisis plan.

A few examples of crises to plan for might be:

Once carried out your plan may hardly ever be looked at. It may sit on the shelf and only get reviewed and update once a year, or when a potential threat appears in the news.

But once it exists, it is then much less effort to revisit it with updates. When an unexpected disaster strikes, it is much more comforting to have some sort of guide with information and predictions for scenarios to work from. It won’t be perfect, because the disaster will almost certainly have an unexpected ‘VUCA’ twist, but it will help you to gather your thoughts and react more quickly.